‘Taxi Driver Protection Act’ Would Require Signs in Taxis and Liveries, Similar to Buses and Subways

Update: the Taxi Driver Protection Act passed the full New York City Council Wednesday afternoon. The bill now goes to the Mayor to sign within 30 days, then TLC rulemaking for the implementation.

“We hope this will bring us one step closer to a safe workplace for taxi and livery drivers who labor 60-hour weeks in complete isolation,” said Bhairavi Desai, Executive Director of the New York City Taxi Workers Alliance. “The law should also provide reason for the District Attorneys’ offices and NYPD to collaborate on a dedicated investigations and prosecution unit.  The level of seriousness has to be established at the top to trickle down to the streets.”

Members of the New York Taxi Workers’ Alliance rallied on the steps of City Hall Tuesday afternoon in a final push for passage of the Taxi Driver Protection Act, calling for warning signs in yellow taxis, green cabs, liveries and black cars, before a full Council vote on Wednesday.

“Assaulting a Taxi or Livery Driver Is Punishable By Up to 25 Years in Prison,” the signs would read.

State law already calls for a penalty enhancement of five (5) additional years to the maximum penalty when the victim of felony assault and other crimes is a taxi or FHV driver. The passage of the Taxi Driver Protection Act will ensure that there is education so the law can serve as a real deterrent for would-­be assailants and a reminder to police and prosecutors to take assaults and crimes against taxi and FHV drivers more seriously.

“This campaign was born in my hospital room, when I was recovering from being stabbed with a hunting knife by a passenger,” said Mamnun Ul Haq, a co-­founder of the New York Taxi Workers Alliance. “So many of my fellow drivers lost their blood or are permanently injured, even died, from attacks while just doing our job of serving the public. We need real protection. Maybe the man who stabbed me in Brooklyn Heights would have thought twice if he knew the city valued my safety.”

The latest Department of Labor study cites that taxi drivers are 30 times more likely to be killed on the job than other workers. Just this year, there have been a high number of violent assaults and shootings of taxi and livery drivers.

“There is an urgency for the city to show that it stands with the drivers and will protect them,” said NYTWA Executive Director Bhairavi Desai. 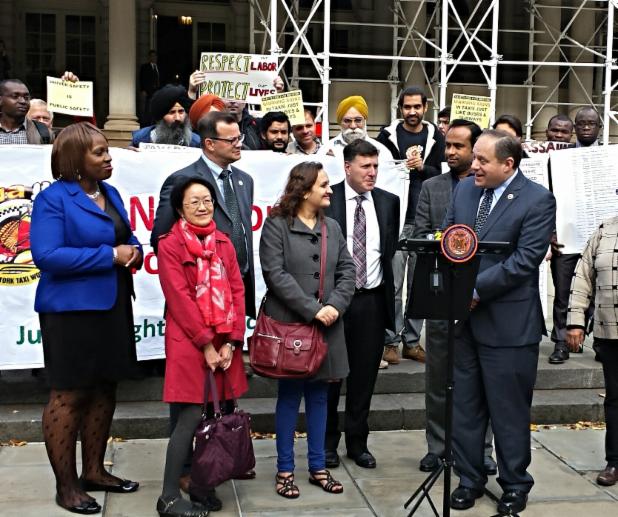 If the Council passes the bill, New York would join Pennsylvania, Illinois and California which already require similar warning signs. NYC yellow taxi, green cab, livery and black car drivers serve half a million New Yorkers and tourists every day. Once passed by the full Council and signed by the Mayor, the Taxi and Limousine Commission will enact rules making the warning sign a requirement.

At the City Hall rally, drivers were be joined by bill sponsor, Councilman Rory Lancman, and stood with fellow drivers like Mr. Haq who have overcome traumatic assaults to fight for the protection of all drivers.

The secret is that it is easy to #vote for the no-brainers & this is a no-brainer #TaxiAndLiveryDriverProtection pic.twitter.com/yGwrHcnKDu

You May Also Enjoy

WHAT DO YOU THINK?

Brooklyn brief is a reader-supported blog. In an age of digital media, a viable journalism enterprise is more difficult to sustain than ever. We therefore ask for $1 subscriptions for those who find our content useful. We are grateful for your support.

Get A Brief Rundown

Meet the Developer of 626 Flatbush Avenue

‘Thanksgiving’ at Rooftop Films: ‘Catnip for Hipsters’ Evens Out and Finds Its Stride